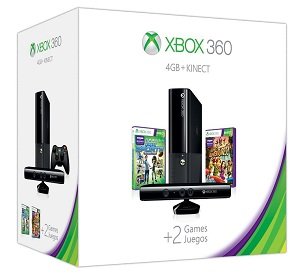 The Xbox 360 4GB Kinect Holiday Value Bundle features two great games: Kinect Sports: Season Two and Kinect Adventures. It also includes one month of Xbox Live Gold membership. Wi-fi is built-in for easier connection to the world of entertainment on Xbox Live, where HD movies and TV stream in an instant.1 Xbox 360 is more games, entertainment and fun. Controller-free gaming means full body play. Kinect responds to how you move. So if you have to kick, then kick. If you have to jump, then jump. You already know how to play. All you have to do now is to get off the couch.

Kinect Sports: Season Two: Kinect Sports: Season Two sprints out of the box at full speed, taking full advantage of the revolutionary Kinect technology and its latest exciting features like in-game voice commands4 and enhanced motion tracking. Bringing the family together, and introducing Challenge Play to Xbox Live and living rooms worldwide, Kinect Sports: Season Two harnesses the power of friendly competition to provide a more immersive experience for everyone from casual players to top-notch athletes and hardcore sports fans.

Kinect Adventures: Kinect Adventures is a full-featured Kinect game where you and your friends will explore the world – and beyond – through 20 active adventures to achieve the ultimate reward: Expert Adventurer status! Jump, duck and dodge your way through roaring rapids and challenging obstacle courses. Use your skills to save a leaky underwater laboratory. Get creative by showing off and sharing your accomplishments online with Photo Moments and Living Statues. The spirit of adventure awaits!